It might be slow and awkward but if you let your left hand do the writing, you may access parts of your mind that have not been freely active since you learned to read. Rosie Jackson explains

My mother thought she was doing me a favour teaching me to read early – I was devouring the Bible by the time I was four – but it proved a mixed blessing. It meant the left side of my brain was in control even earlier than usual, putting word before image, logic and abstraction; before intuition and concrete experience

I’m still struggling to repair the damage inflicted by these precocious left-brain skills, and to give more priority to my imagination and creativity. Writing with the left hand is one way I’ve discovered of doing this[1].

The human brain is divided into two hemispheres, and research with stroke patients has shown that these have very different functions. Damage to the left hemisphere tends to cause problems with speech and abstract thinking (and paralysis down the right side of the body), while injury to the right causes difficulties with visual and spatial tasks, such as  map-reading, recognising faces, appreciating music (and paralysis down the left side of the body). The infamous ‘man who mistook his wife for a hat’ was suffering from right hemisphere damage[2].

This functional difference between the two sides of the brain – known as hemispheric lateralisation – has enormous implications for creativity. It suggests that if we can access the right brain more fully, we might be able to open onto a more intuitive, everything-at-once kind of perception, instead of the more rigid, analytic, time-bound approach of the left brain. Betty Edwards’ inspiring Drawing on the Right Side of the Brain is the classic guide to visual creativity based on this theory.

Yet our culture is still left-brain dominant and reluctant to allow the right brain to reveal itself. Socially, this is expressed in the way reason and objectivity are valued over imagination and subjectivity. Dexterity (from the Latin dexter, meaning right) connotes skill, adroitness, efficiency, cleverness, whilst the left hand is sinister (Latin for left) – clumsy, shadowy, mysterious and evil. An 1882 entry in The Lancet notes, ‘Dexterity appears to be confined to the human race, for the monkey tribes use the right and left limbs indiscriminately’. Until quite recently children were not allowed to write with their left hands – my father repeatedly had his left knuckles rapped.

Fascinating research by US brain surgeon Leonard Shlain, reported in his book The Alphabet versus the Goddess, suggests that this tyranny of the left brain is linked to the rise of both literacy and patriarchy. He points out that it is the right side of the brain that matures before the left in the womb. But just as there is evidence that an original matriarchy was supplanted by patriarchy, so the right brain’s more ‘feminine’ way of imaging the world was gradually suppressed and, with the emergence of a written culture, displaced by a ‘masculine’ order, obsessed with word, reason and control.

‘The right hemisphere’, writes Shlain, ‘is the realm of altered states of consciousness, where faith and mystery rule over logic... It comprehends the language of cries, gestures... touching and body stance... It generates feeling states, such as love, humour or aesthetic appreciation... The right brain’s feeling states all possess a non-discursive quality... they can overwhelm the brain’s more recently evolved glib facility with words’.

If the right brain is essential for creativity, how are we to coax it into action when we come to write? Different people have different methods – music, drawing, dancing, walking, thinking of dreams – but one way is simply to start writing with the left hand.

This may sound contradictory, since writing seems such a left-brain skill. But I find it always works – probably because using the left hand directly activates the functions needed for the creative act.

There is an added value too for writers, in that we are put back in touch with the physical act of forming words as though for the first time. We can no longer skate over the page of dash over the screen, but are forced to face once more the slow and primitive act of looping letters together: these strange marks on the page that somehow carry meaning.

Writing in this way recreates our first entrance into language, before words, before grammar and syntax, as though stepping once more into that creative space ‘behind the wallpaper’. Theoretically, you could even say that it takes us into what Julia Kristeva would call a ‘non-thetic’ space – on the boundaries, on the edge[3].

What I recommend is starting a session of creative writing with your left or non-dominant hand, then switching to your usual hand, but trying to stay in that right-brain mode. The left-hand writing serves as a kind of warm-up for more expansive work. At a later stage, of course, any writing done in this way would need to be redrafted and edited – I am not suggesting craft and conscious shaping don’t also have their necssary place.

I’ve used this device extensively as a start-up exercise in workshops, and it really does open the floodgates. It can spark all kinds of unexpected insights and introduce unadmitted aspects of ourselves, shadow sides.

One of my students, a neat country-casuals woman in her sixties, was at first horrified, then amused, to find that her left-hand writing released a flood of invective, swearing and blasphemy: she claimed she’d never used a four-letter word in her life. But thanks to this release she went on to write some wickedly funny – and well-crafted – stories.

So, the method. Find some paper, preferably unlined and as large as possible. Using your left hand, start writing word associations, letting one word unconsciously generate another in a steady stream. Then let clusters of words gradually emerge – ideas, pools, not necessarily full sentences.

The important thing is not to try too hard. Don’t attempt to write tidily or in a straight line. And don’t be impatient with your own clumsiness and lack of ‘dexterity’. The aim is to get your usual self out of the way. You will be surprised by what surfaces.

Obsessions and preoccupations may come to the fore – and perhaps suggest unexpected resolutions. This is also a useful device for decision-making. Write down a problem with your right hand and let your left do the answering. Similarly, if you’re struggling with a fictional character, let them sit down and write with your left hand – and see what their right brain is longing to say.

You may find there’s a voice in your head that wants to resist such a childish technique. It will whisper that left-handed writing is to the Booker Prize what cave painting is to computer graphics.

Ignore it. Don’t let it drive you back to your computer.

Remember, if small is beautiful, so is slow. If the pen can’t rush, neither can the mind. It’s forced to slow down and be more in tune with the body, senses and heart, to have different priorities.

The only time I’ve had abuse in a writing workshop was when I tried this method. A post-graduate student launched into a fierce attack on my crackpot ideas. I can sympathise with his rage, though. Most of us believe that improving our writing requires more left-brain dominance, not less. Yet there he was, awaiting initiation into the mysteries of post-modernist prose and narrative theory, only to be offered the humbling experience of the left hand.

The poet and novelist Rainer Maria Rilke wrote, ‘If the Angel deigns to come, it will be because you have convinced her, not by tears but by your humble resolve to be always beginning: to be a beginner’. Opening up to the right brain means exactly this: humility, openness to something larger than our egos, readiness to side-step our rational controlling minds and to discover what is forgotten or unknown. As Shlain says, the right brain ‘is also the portal leading to the world of the invisible’.

This article was originally published in Issue 3 of Mslexia.

ROSIE JACKSON is a poet, memoirist and writing tutor. Her latest pamphlet Aloneness is a Many-Headed Bird (Hedgehog Press, 2020) was co-written with Dawn Gorman; and her latest full collection Two Girls and a Beehive (Two Rivers Press, 2020) focussed on the art and lives of artist Stanley Spencer and his first wife Hilda Carline. Her other books include The Glass Mother: A Memoir, The Light Box, Mothers Who Leave, Fantasy: The Literature of Subversion and What the Ground Holds. Rosie Jackson offers workshops in poetry and memoir writing as well as individual mentoring.

[1] Although this article assumes right-handedness as the norm, if you are naturally left-handed, you can try the exercises with your right hand instead. The point is to break your usual habits.

[3] For further discussion of this, see my book Fantasy: the literature of subversion. 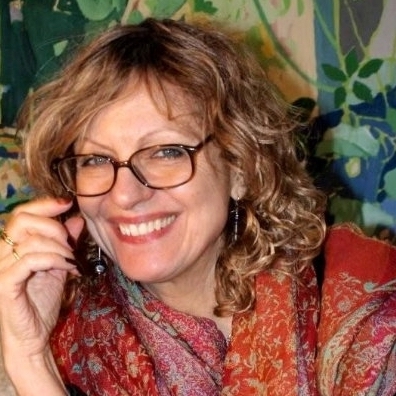